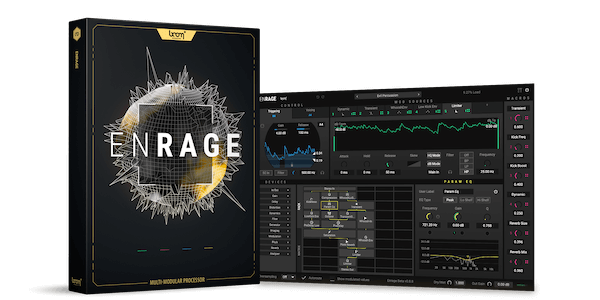 I had the pleasure of being contacted by Boom Library to try out their new EnRage software, I must say that I am pleasantly surprised by the versatility and immediacy of this instrument, qualities that do not always go well with software capable of performing even very complex operations in audio processing. Let’s see what it does. 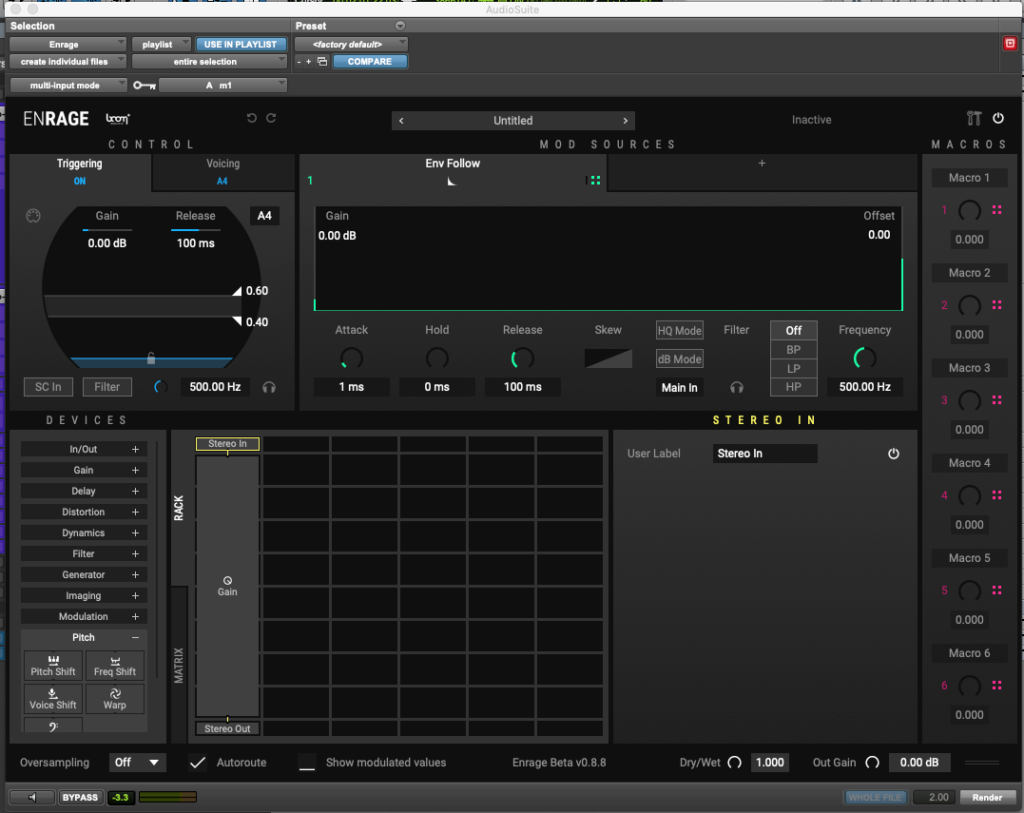 EnRage can be considered a multi-effect that allows to create processing chains and to modulate their parameters using various sources and modulation tools. In addition to the classic ADSR, LFO and Curve modulators, EnRage is equipped with other modulators including a very efficient Envelope Follower which can be fed by side chain input. The interface is clean and easy to use. 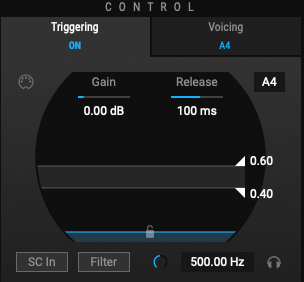 The Control module section is where it’s possible to manage the trigger sources of the modulators, which can be done both using audio and MIDI signals, allowing external controllers.

To the right side of the Control module there is a section dedicated to parameter modulation tools where it is possible to use multiple modulators at the same time; these exponentially  increase the complexity of the audio processing. We have already mentioned the classic ADSR, LFO and Envelope Follower modulators, but the EnRage modulator set also consists of other tools with a different kind of complexity. For instance the Formula modulator allows to customise the modulation through the use of math. Another interesting one is the Pitch Tracker which activates parameter modulations based on automatically traced tones.

The Device section contains all the processing algorithms that can be navigated in the form of a drop-down menu and are all categorized according to the function they perform. Processing chains can be created by dragging modules to the grid immediately to the right of the Device panel.

The I/O section is at the core of the program. As mentioned above, it consists of a grid in which it is possible to create very complex processing chains; On the right side of the grid there is the panel containing all the parameters that control the Devices.

The Macros section is dedicated to further controls with which it is possible to group multiple parameters and manage them simultaneously. When the plugin is inserted on the track it is possible to automate the values of the Macro controls. 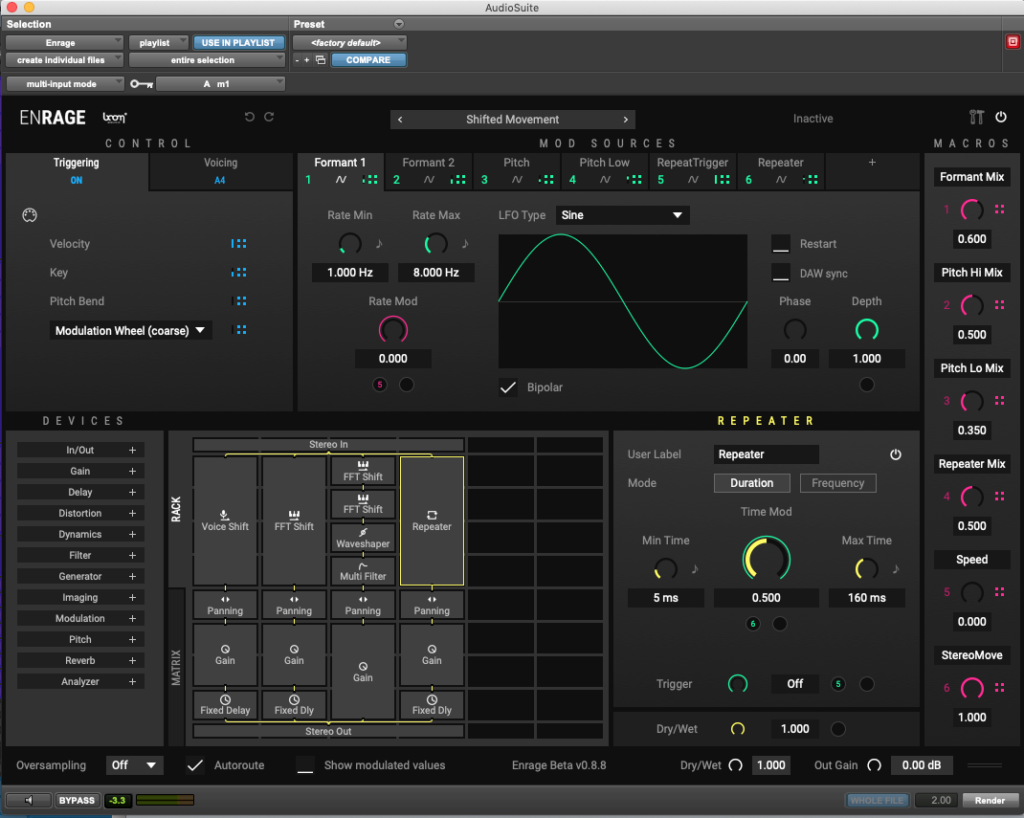 As already said, creating even very complex processing patches is a simple operation, you can get an idea by browsing the long list of presets that EnRage comes with. Of course, you can create your own presets as well. 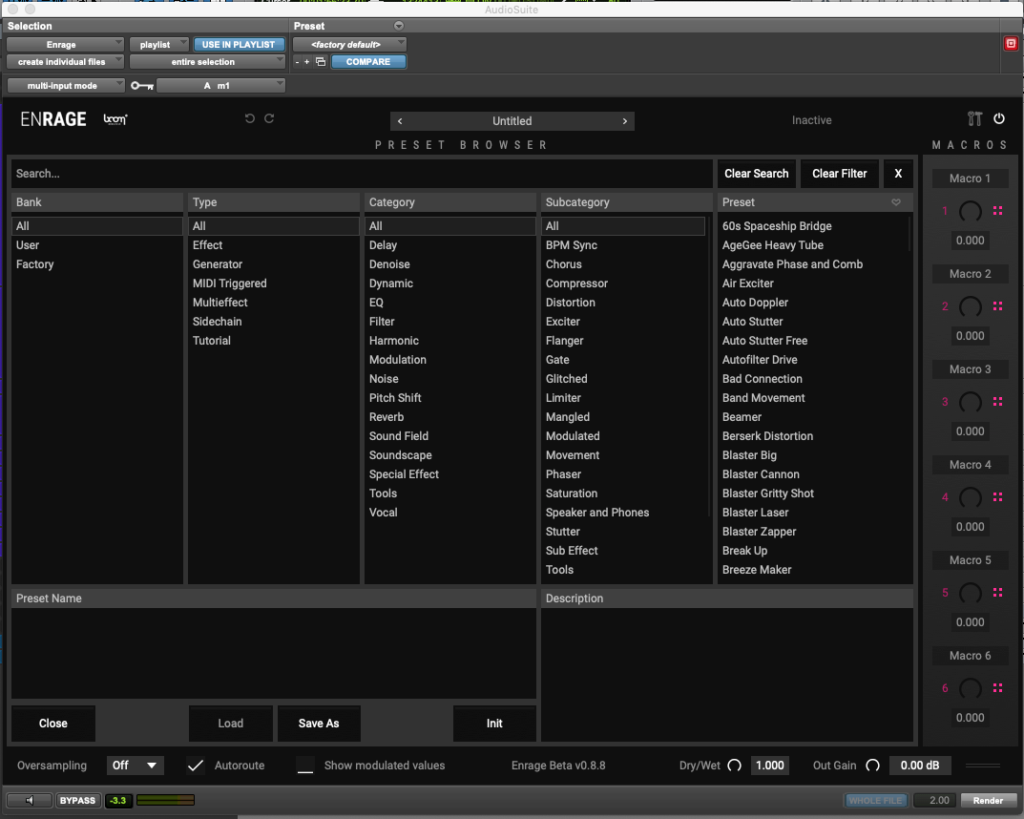 Once you have become familiar with the interface and its functions, it is easy to proceed with the creation of very interesting effects. I recommend approaching this operation by trying to have a plan in mind for how you want to operate on the sound and then bring it back to the software. The following videos are an example of a very first attempt just after an hour from installation. These are very simple operations that however give an idea of the potential that can be brought into your workflow when it comes to making pure sound design.

In the first example I wanted to test the effectiveness1 of the Envelope Follower used with side chain to manage the gain of a continuous sound and to impress the envelope of a transient sound. I used a recording of footsteps as the side chain modulation source to modulate the sound of a dragging on gravel and  movement of water.

In the second example, starting from the previous setup, I merged the sound of a metal closure with an explosion in order to make the idea of a heavier gate. Unlike with the previous one I added in parallel a sine wave at about 50 Hz which can be generated directly within EnRage, the sinusoid follows the same profile of the envelope generated by the gate which serves to modulate the sound of the explosion. In this way it is possible to create a sort of bass enhancer. The modulated sine wave is subsequently treated with a reverb.

In the last example I increased the number of modulators and the number of devices to create a whoosh effect starting from the recording of a water stream. An Envelope Follower, an LFO and an ADSR modulate multiple parameters simultaneously.

My experiments only scratch the surface of the firepower of this plugin and show how this software can immediately become useful for any type of application even when you just want to enrich more “everyday” sounds. An excellent tool to have in your toolbox both in the pure research phase and creation of sound effects and as a tool to be included in the sound editing workflow.